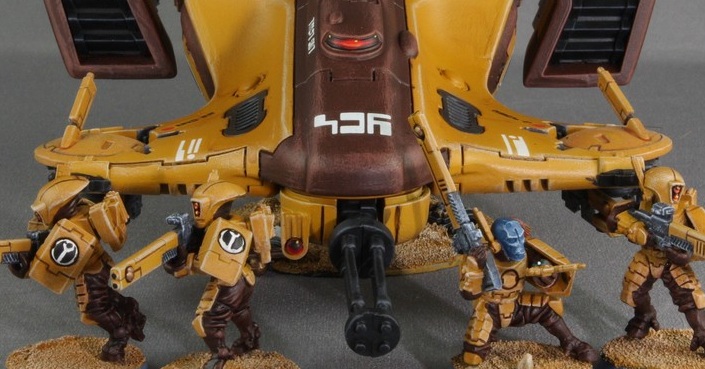 I tried helping the troop painting process this time around, by painting something fun as well as troops in the same go. They do after all, have the same color scheme. So I assumed it would be a fairly ok thing to do, and so I did, and it was. 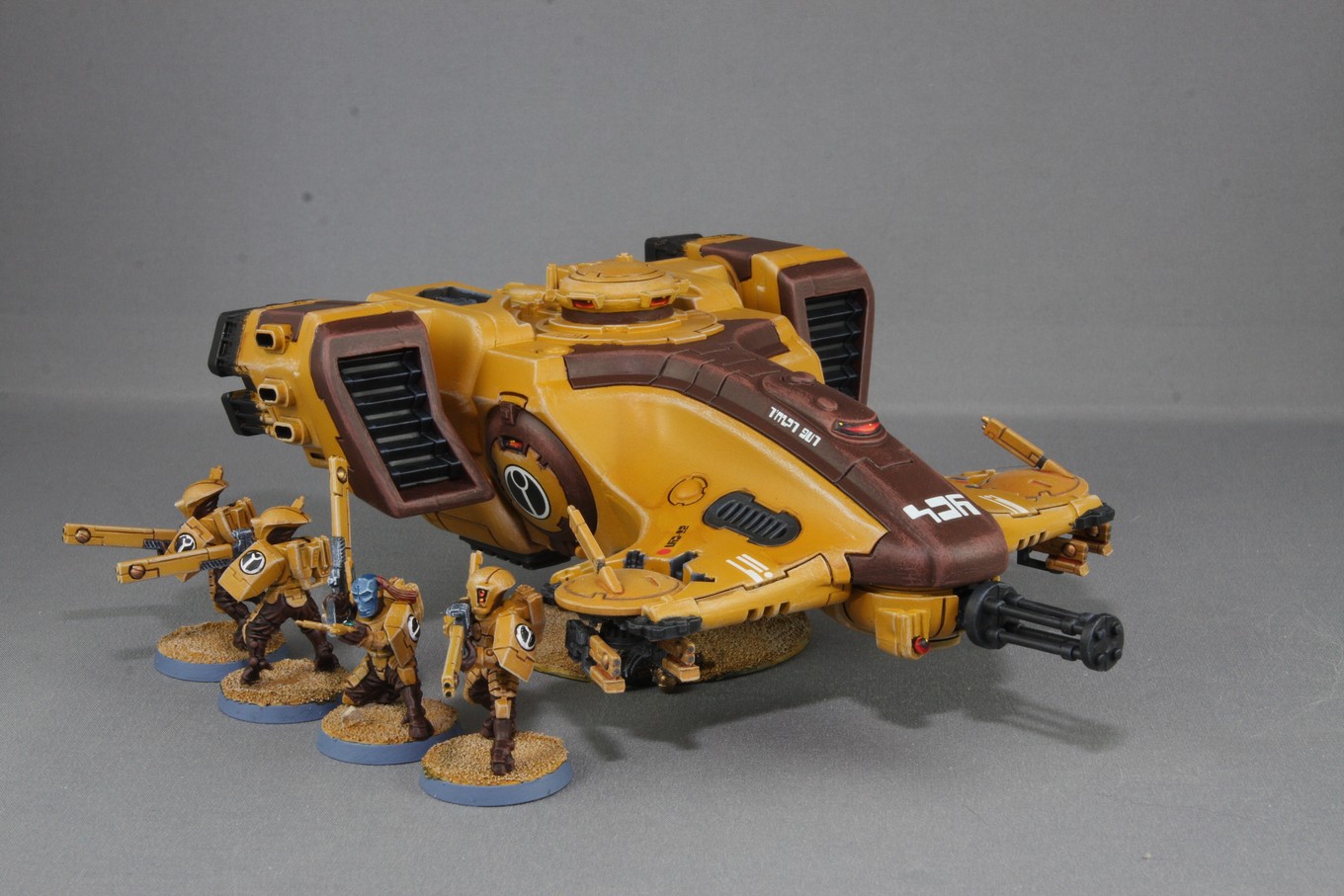 It was simple really. I had the same paint mixed for my Devil Fish in the air gun, and so I took that over to the four fire warriors I'd assembled and primed, and did the spray job on them as well. What places I couldn't reach with the air gun, I simply brushed the paint on to fill the gaps. It didn't take that much effort at all. These guys were painted in the course of about two or three days.

So, as always now, here's the list of paints I used. 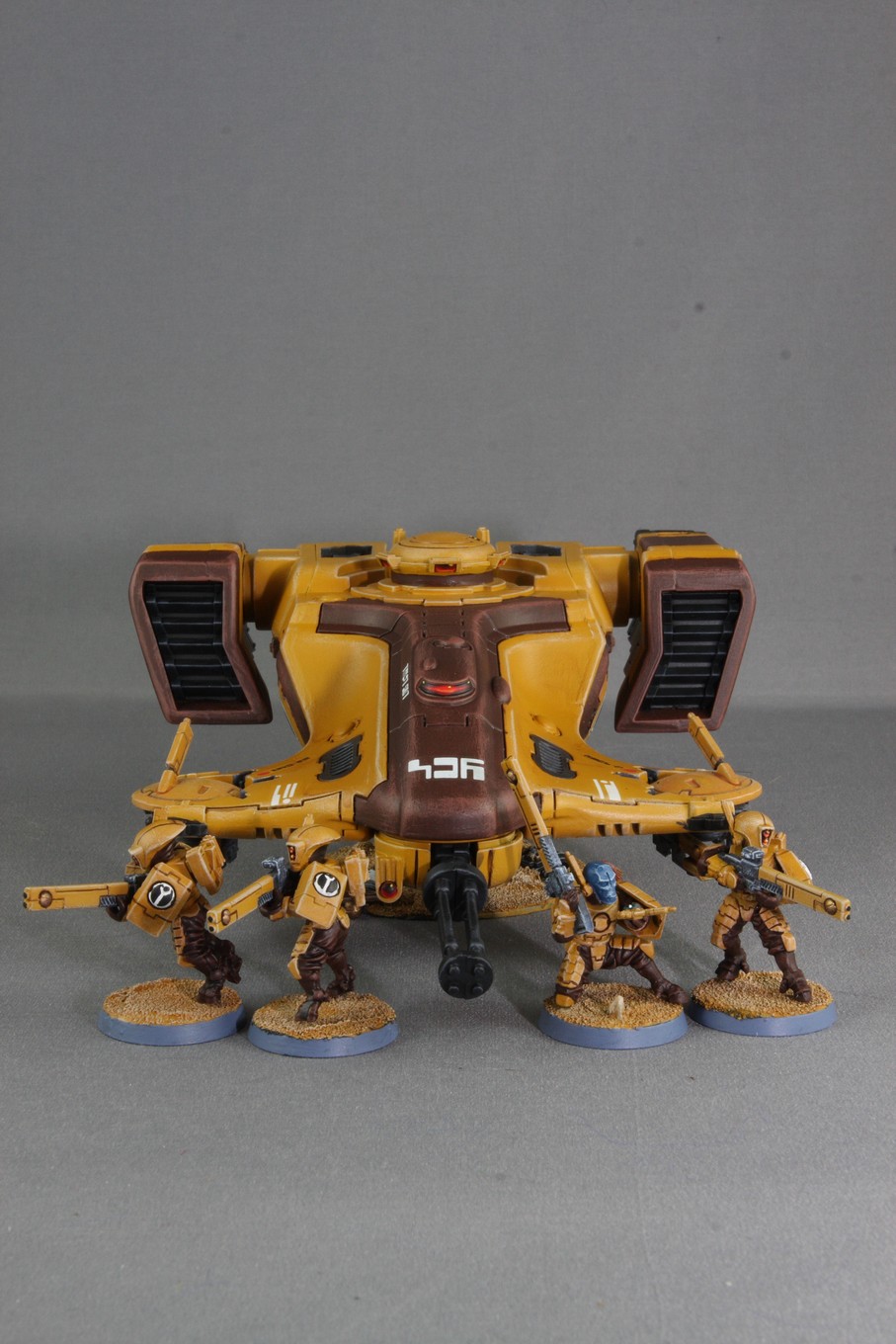 It's essentially an exact copy of the Hammerhead/Sky Ray that I painted. Amazing that? Right? Huh?

What I found highly amusing, is that my Tau Fire Warriors turned out incredibly good this time, and color wise they were very on par with what they should look like. I had an old model with me at the time that I was referencing, and that old model was very.... uh... orange. Not the desert yellow that I paint now. I couldn't remember if I'd used different colors or not back then, but maybe I did. 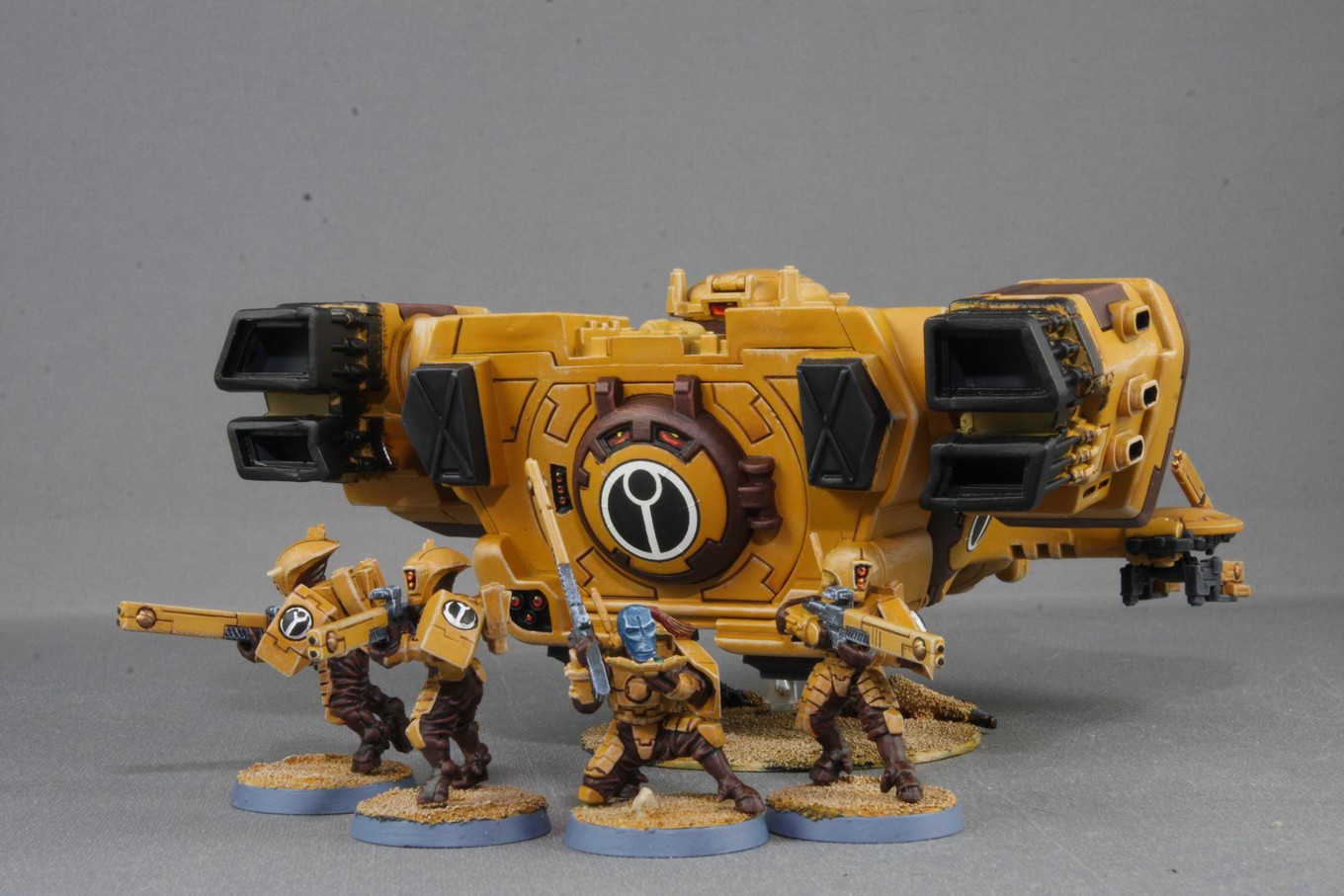 Then I remembered how I'd done the base coating. Base coating matters especially with light colors. For those Fire Warriors, the base coat was a brown, not a desert yellow like I use now. I am guessing [hoping?] that this is the reason they look different. That the brown is showing through the yellow to give it that different tint.

Oh well. So much for me having an entirely united color schemed army! 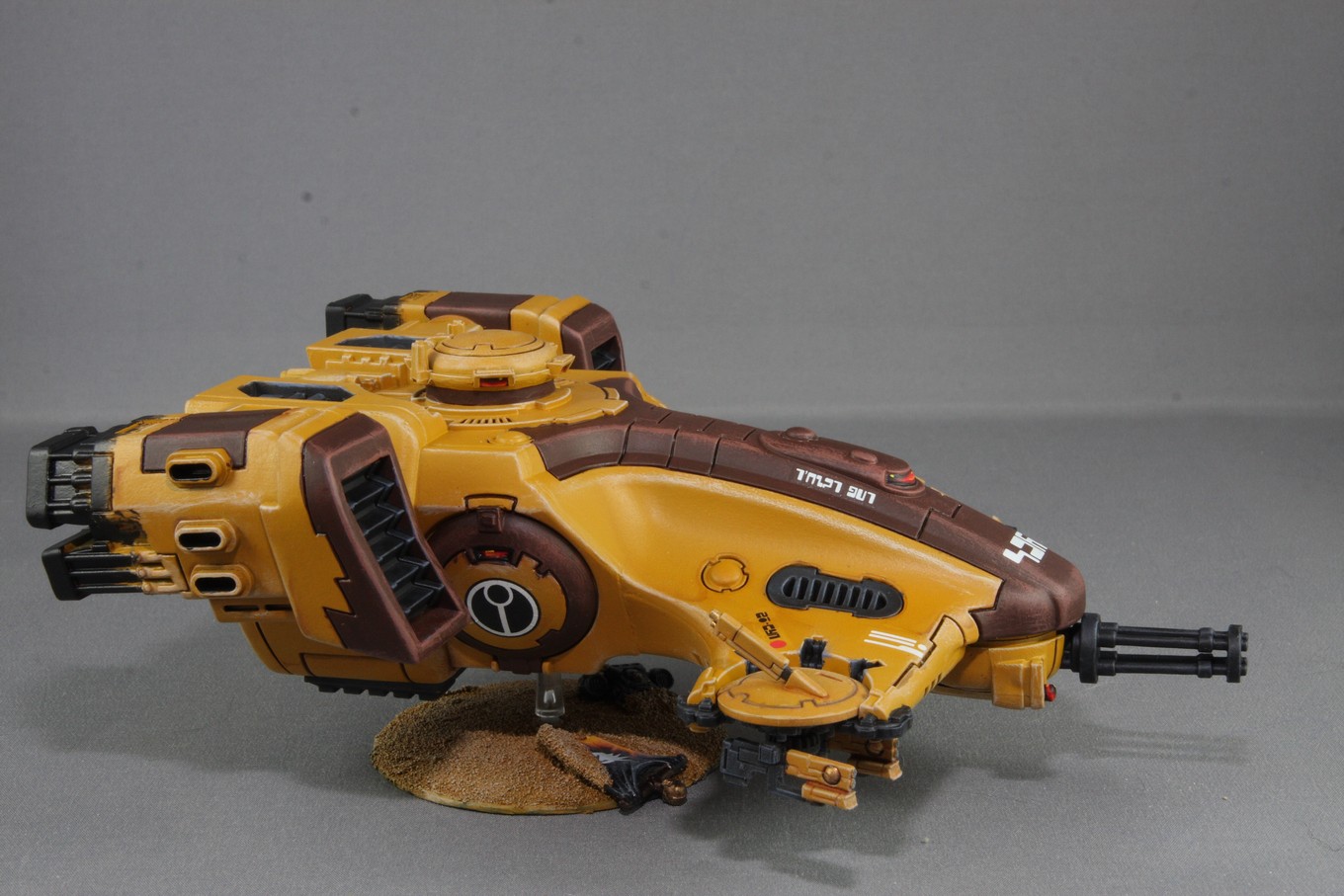 Again though, easy paint job. I have decided that my Devil Fish will have the solid brown strip from bumper to the hatch, as opposed to my hammer heads which have it broken up just a bit. It's not that big of a difference in color scheme, but it works for me... And that's all that matters right?

I again tried to burn the engines a bit with some black, and I'm going to have to try a little harder next time. I'm sort of getting it, but not quite. It's almost too solid really, but that's my effort towards "war damage" or "wear and tear." I think Tau, being the technically advanced race that they are, definitely keep their vehicles in tip top shape. 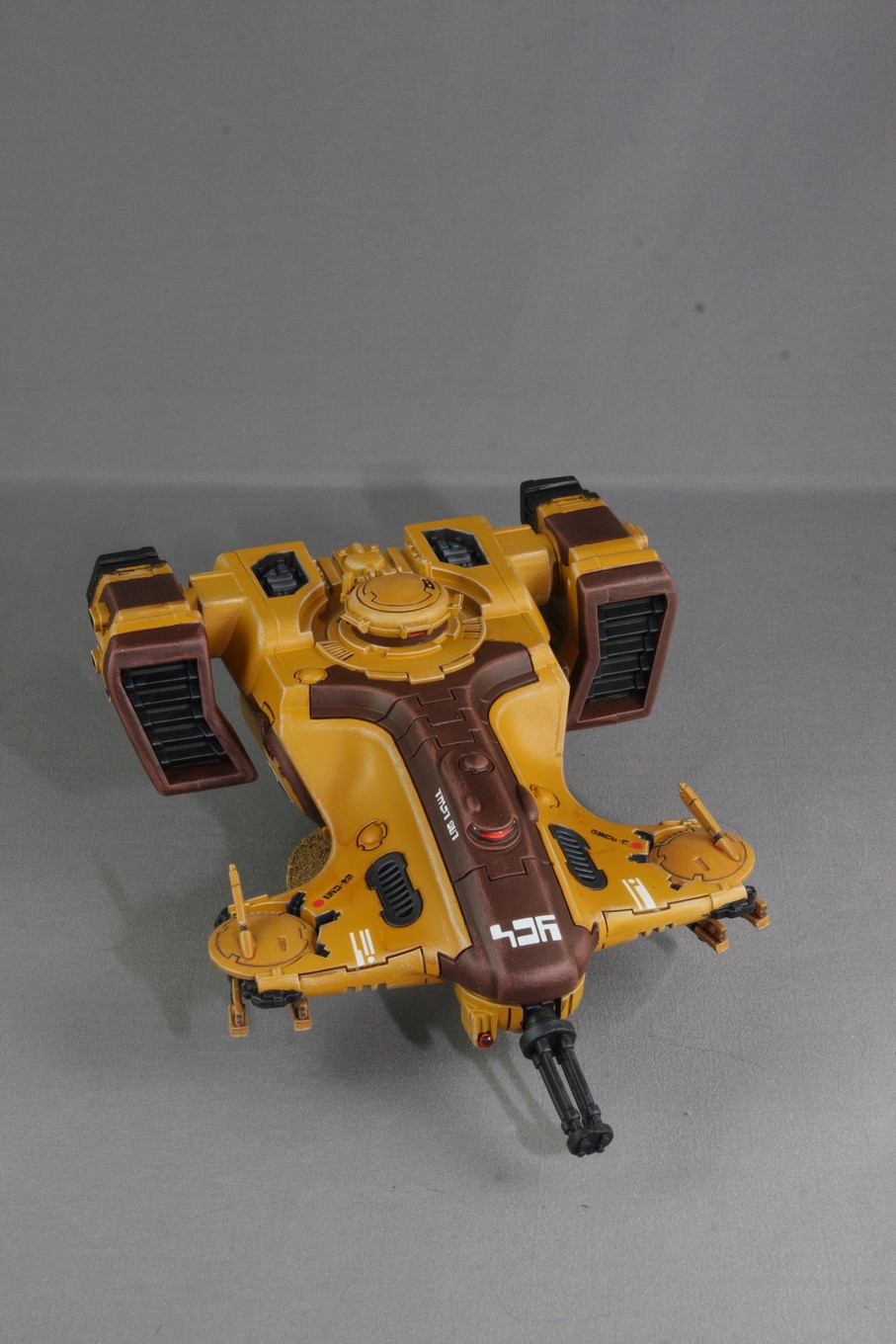 The last thing to say about this paint job is the base spray. So I have figured it out, and it really is that I just need much less spray than I think I do. Keep the can 20 cm's away from the object gentle left to right/right to left sweeps over the object. Never start spraying while the nozel is pointed at the object, and be quick. I was more scared about the troops doing this than I was the vehicle, but this time I checked and I have retained crisp defined edges and details on even the troops. This made me excited and happy. =)

So that's it really. I bet people are wondering if I'll ever try the "patterns" for the vehicles. I gave it some thought. It's a lot of effort, and I think I will give it a try. It will however, only be done on the Devil Fish that is designated for my Path Finders when I get a pair of them. I feel that a "camo" paint job suits their role perfectly since they should be pushing to the fore front of the battle and planting markers on troops from cover. For now, the Hammer Head pattern and the Devil Fish pattern will stay for army consistency sake. 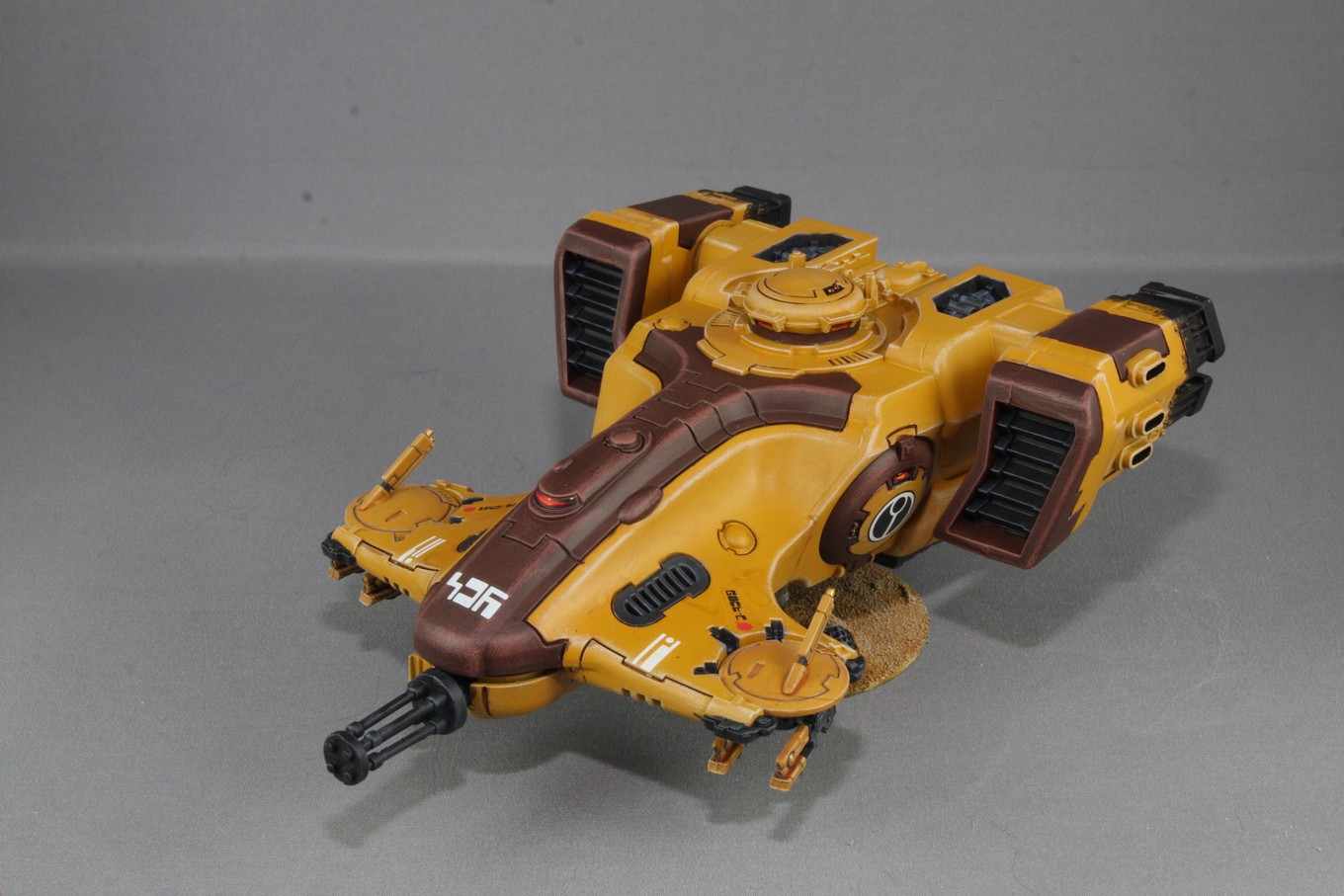